I’ve always had a fondness for this gargoyle – every time I’m on the roof of the Notre Dame Cathedral I seek him out – I don’t know if it is the crazy eyes or what but compared with the others he seems just a bit ‘out there’. I cropped in tight on him this time – I wanted to make sure I focused on the eye because although it was sculpted centuries ago it is still in pristine condition and completely expressive in his thoughts.

The craziness hits me this week because we pick up a new puppy on Wednesday. As much as I’m looking forward to it I feel I’ve got a couple of endless/sleepless/eternal nights in front of me until we get the little guy accustomed to his new surroundings. Hopefully our seven year old cat is able to integrate the new companion into her day-to-day activities. She still has a lot of energy so I’m hoping they become playmates – fingers crossed that by introducing them slowly we can make them learn to at the very least tolerate one another. 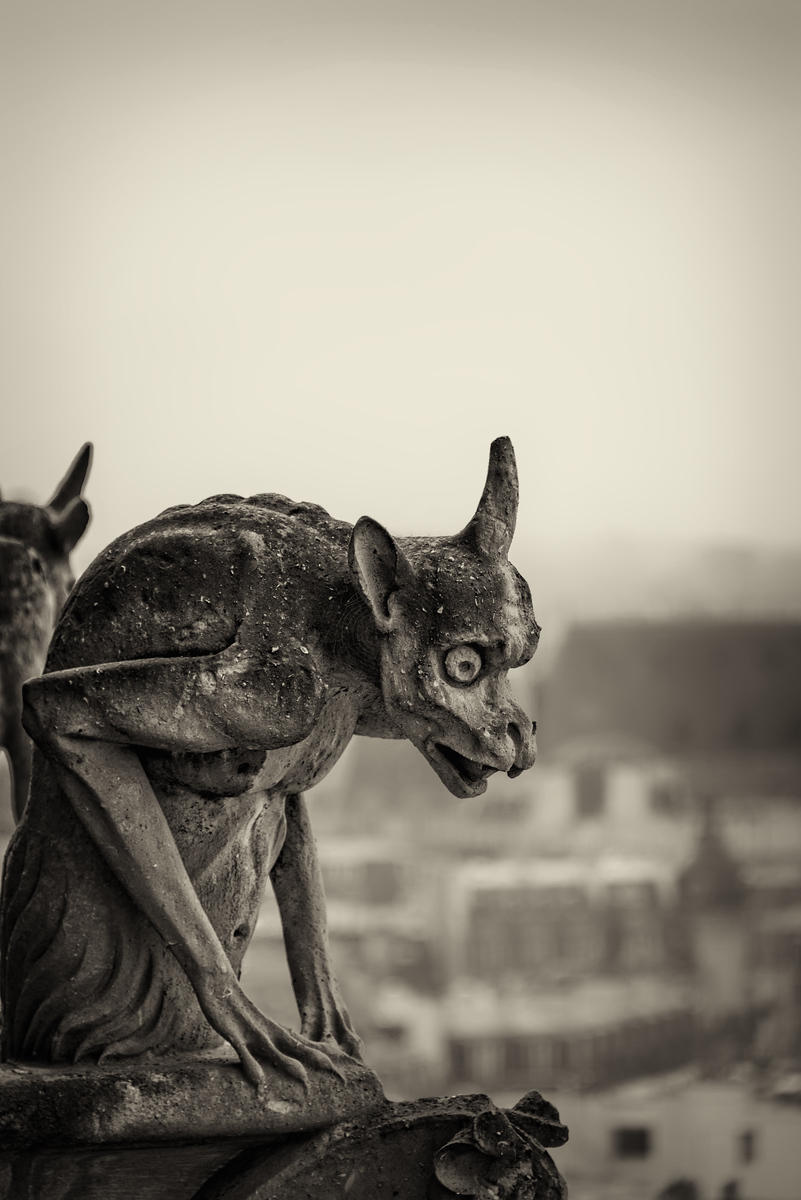 No matter how you approach the Louvre in Paris, France it is beautiful. The entire historical structure and fact that it was the royal palace at one point really makes alot of sense given the opulence of it all. Adding to the atmosphere on this night was a violin player sitting off to the right who was playing various tunes and entertaining the many people who walked by.

You might think that we had this place all to ourselves but we didn’t – people were walking by all the time stopping to listen to music so in order to get this shot I actually had to stand here for about ten minutes and take about ten different pictures. I processed them all the exact same way in Lightroom and then imported them all as layers in Photoshop – working diligently through I masked out all of the people in the main walkway – there are a few lingerers down near the base of the pyramid but they are small. I could have brushed them out but unless you zoom in 300% you don’t see them so figured it wasn’t worth my time.

Walkway at the Louvre (Paris, France)

The pyramid structure is just the main entrance but do you notice how it is slightly off center? That was the first thing I noticed when I went and stood in this location to take the shot. I kept trying to move the tripod to get into a position where the pyramid was lined up right in the middle of the entryway. However, if I moved a few feet to the left to line up the pyramid in the middle the walkway would have been slightly off.

With all the perfection that this place is designed with – how did it happen? I googled it but couldn’t find the answer – but it was just one of those things that bothered me as I stood there.

I wanted to title this post “Perfectly Imperfect” because when I look at it that’s what I think of due to the warped nature of the church given the angle I was shooting at. This has the look of a fisheye lens but it is made with a standard wide angle lens – however, given the angle I was standing at I wasn’t able to get the whole church in the frame without trying to get creative. Thus, I thought ‘vertorama’ time – similar to a panorama which stitches together shots across a horizon this is an attempt to stitch shots in a vertical manor. Often used when there isn’t room to fit a whole monument in the frame for whatever reason (other building is too close, too many people in the way, etc…) it is a technique that I learned a read about a few years back but never really had a need to try. So, while in front of one of the world’s most iconic churches I figured what the hell and I gave it a shot. It isn’t perfect but for some reason I like it – this is the shrunken version of it so if you zoom in you can’t see all the immaculate details you can in the larger version (it seems pixelated in this version) but I really couldn’t upload the original file because it is HUGE so I had to shrink it just to make it not crash your computer when you tried to look at it.